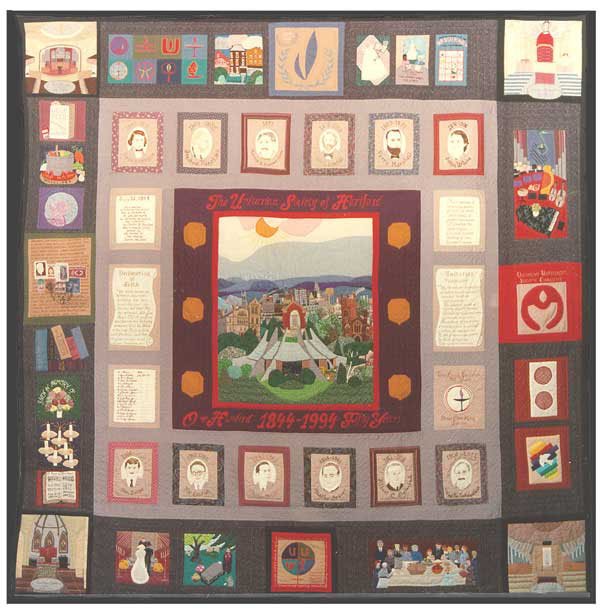 The Unitarian Society of Hartford celebrated its 150th anniversary in Hartford in 1994 with several events, including the creation of a commemorative quilt. The quilt represents many of the things which have been important to our Society over the past 150 years, including the four buildings we have occupied in Hartford since 1844, the twelve ministers who had served us, the Declaration of Faith and the “signatures” of our founding Fathers, contrasted with the UU Principles and beliefs which sustain us today.

It was important to all the quilters that the Commemorative Quilt have a worthy place to hang for viewing. To raise money to build an appropriate case which would show off the quilt and blend with our surroundings, the quilters contributed their talents to two other projects. They sold approximately 150 signatures to members who wanted to sponsor the project, which are embroidered onto the back of the quilt. Then, because a lighted case required even more money, the quilters reunited to make another quilt for raffle. That quilt—depicting the evolution of our Chalice Symbol over the years since it was first designed by a homeless refuge in gratitude for help received from the Unitarian Service Organization during World War II—was won by Bessye Bennett. It hung proudly in her home until her death, when her husband, John Bennett, donated it back the Society.

The Commemorative Quilt hangs in the Chapel.

The center of the quilt is a Hartford “landscape” depicting all four of our church buildings along with other Hartford landmarks such as the Colt building’s onion dome and the Cheney building. The Connecticut River is in the background. Three of our four buildings still stand in Hartford.

Surrounding the center in the first border are six “gold” plaques commemorating women. Until the 1880s, women were not allowed to become members, though they were very active in keeping our Society vital.

Clockwise from the top left are portraits of the first six ministers: Joseph Harrington, Frederick Hinckley, Martin Schermerhorn, John C. Kimball, Perry Marshall and Joseph Waite. On the right side are our modern Unitarian ideals: Unitarian sources of inspiration, UU Principles and our chalice symbol. Continuing clockwise on the lower border are our next six ministers: Jabez Sunderland, Albert Dieffenbach, Charles Graves, Payson Miller, Nat Lauriat and Jon Luopa. At the left are depictions of our Society’s founding principles: the signatures of our founding fathers, our Declaration of Faith and the announcement of our founding date, July 27, 1844.

The four corners depict interiors of our four church buildings. Clockwise from the bottom left is the sanctuary of our first meeting house on Asylum Avenue in Hartford. At the upper left corner is the Pratt Street Church, at the upper right our Pearl Street Church, and at the lower right corner our present sanctuary on Bloomfield Avenue.

The smaller blocks on the outer border represent other aspects of our UU worship, rites of passage, etc. Clockwise from the bottom left: a hymnal open to Prayer For This House, the hymn used to dedicate our Bloomfield Avenue Meeting House, Christmas Eve candlelight service, altar flowers, important books, Covenant to Care, Soup Kitchen and the “Help Feed Hartford’s Hungry” project. At top left are depicted eight versions of our chalice symbol, a Habitat for Humanity project, a christening, a religious education class and a quilt our children made for the Romanian Sister Church. Top right is music, followed clockwise by two of our many altar hangings. At bottom is a meal/coffee hour in Fellowship Hall, a funeral/memorial service and a wedding.