Ticket prices for most shows:

$14 for students with ID

This special Meeting House Presents Saturday concert is not included with season tickets,

but season ticket holders get a $5 discount.

Concerts are the third Friday of the month at 7:30 pm. at the

Hello friends and music lovers. Live music is back!

Mad Agnes is Margo Hennebach, Adrienne Jones and Mark Saunders. Each member arrived at the trio from a staggering list of solo accomplishments, including songwriting competitions, recordings, and the ability to sleep on any surface.

Back from a ten-year lunch break, Mad Agnes has reunited to bring you the intricate harmonies and compelling songwriting that have always been their signature. Margo Hennebach, Adrienne Jones and Mark Saunders have been singing and playing together since there were dinosaurs, performing across the U.S. and overseas. While dodging labels and mixing styles (Folk, classical or Celtic? Soaring vocals, incisive lyrics or giggly repartee?), the genre-bending trio has won hearts on two continents, and individually and collectively amassed a body of work which comprises 13 CDs and a concert DVD.

Though each member is a multi-instrumentalist, this iteration sees them pared down with fewer instruments and only one microphone, around which they form and re-form, early-radio style. This allows them to be more playful and more connected, bringing you guitars, mandolin, percussion, keyboard, and “three-part harmonies as tight as jeans from the dryer” (Rob Weir, The Advocate).

Mad Agnes CD #6 is in progress, with new songs, new joy, and new little instruments! Look for it, and them, in 2022 at a venue near you.

As one presenter once introduced them, “Together, the three of them make a great couple.” 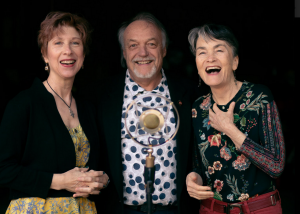 ber what it was like to have a home, plant a garden, and take care of their animals.  In 2019, they got a little itchy, and began to do a few shows in New England.  COVID delayed their return to presenting live music, but it has also served to solidify their commitment to each other and the music they make together.

They are now venturing farther from home to play for long-time fans and are excited to be creating new ones as well. Lots of new music is on the way. Stay tuned…

Multi-instrumentalists all, Hennebach is classically trained in piano, Jones is self-taught on guitar and bass, and Saunders adds color with a vintage mandolin and subtle electronic processing on his guitar. The sound can be full as a concert hall or delicate as three voices singing a cappella.

Tickets are $25 for this show, or $20 for season ticket holders.

Celebrated performing songwriter Susan Werner has made a name for herself coast to coast. From her 1995 major label folk/rock debut “Last of the Good Straight Girls” to her2007 collection of agnostic gospel hymns “The Gospel Truth” to her 2017 travelogue “An American In Havana,” Werner writes ambitious concept albums with subject matter and sounds to match.

“Susan Werner has always been a remarkably perceptive artist, one who’s able to tap into the current climate and share sentiments that ought to be expressed. Her new album, and her 14th studio set to date, Flyover Country, is no exception. While it’s grounded in a specific theme — that is, her love of the heartland sounds that inspired her early on, the sentiment goes far deeper, a reflection of the absolute uncertainty that’s plagued the nation since the beginning of the year and, in reality, further back than that.”

Magic and Myth: Music from the Old World and the New

Multi-Genre violinist/fiddler Seán Heely is one of the most creatively versatile and captivating young artists of his generation. He is a U.S National Scottish Fiddle Champion as well as an award-winning Irish Fiddler and singer in the folk traditions of Scotland and Ireland. Seán holds a degree from University of South Carolina in Classical Violin Performance and was a 2019 Artist in Residence at Strathmore Music Center in Maryland.An educator in demand, Seán is an Adjunct Instructor at American University, he has also been on the faculty at several summer camps such as Acadia Traditional School of Music and Arts, Upper Potomac Fiddle Retreat, and Fiddle Hell Festival. He was selected to compete in the prestigious Fleadh Cheoil na hÉireann All-Ireland Senior Fiddle competition in Aug 2017. He has performed in Scotland, Ireland, and at venues in the U.S such as the Kennedy Center in Washington D.C.

Along with his accolades in Traditional Music, Seán made his Classical solo debut with the Virginia Symphony in 2012 performing Mozart’s 5th Violin Concerto. A composer and arranger, Seán has won national awards including the 2016 Scottish Fiddling Revival’s Tune writing competition. Seán was a featured soloist with the Virginia International Tattoo in Norfolk, VA in April 2017 and 2019. Recently, Sean was named the recipient of the first annual Claude Martin Memorial Life Membership Award from the Folklore Society of Greater Washington, an honor granted in recognition of his significant contributions to the local folk scene while still under age 30.

For the first time, Maine Fiddle Camp is bringing a road show to Connecticut so we can enjoy the unique blend of traditional Maine music with a variety show twist. Music will be performed by some of the very talented professional musicians who spend part of their summer teaching at Maine Fiddle Camp, to raise money for their Scholarship Fund. After intermission we might even have a barn dance in Fellowship Hall.

Our email includes concert announcements, updates, and info about folk music events in the area. Subscribe to Meeting House Presents Email  send a message to MeetingHousePresents@gmail.com. Put “subscribe” in the subject line. We send one or two emails each month. 50 Bloomfield Ave. at 7:30 p.m.

Rescheduling this concert at the Unitarian Society of Hartford when we are  able to gather for live concerts again.

Maine Fiddle Camp is about playing music and learning tunes, and being able to play and enjoy those tunes with other people whatever your level of experience or ability.

The emphasis at camp is on learning tunes the traditional way—by ear.

Maine Fiddle Camp is an outdoor Maine summer camp experience. Campers stay in basic rustic cabins without electricity or in their own tents. Youths stay in cabins but may stay in tents with their families if they wish. We have separate, centrally located, men’s and women’s bath houses with hot water showers, multiple wash basins and flush toilets as well as convenient “potra-potties” throughout camp. Eating is outdoors under a tent, and classes are mostly outdoors under canopies.

Summer days in Maine can be hot or cool, and nights might be hot but are more generally cool or sometimes even cold. Come prepared for anything. And yes – there are mosquitoes. But there are loons, too, and when we’re lucky they make their own beautiful music at night.

Good music and good food are elegantly combined at camp, with meals and snacks planned and prepared by our head chef, Tim Johnson, and a cadre of volunteers who take time out from music to help in the kitchen. Fiddle Camp is like that – many things happen because someone pitches in and helps out.

For the first time, Maine Fiddle Camp is bringing a road show to Connecticut so we can enjoy the unique blend of traditional Maine music with a variety show twist. Music will be performed by some of the very talented professional musicians who spend part of their summer teaching at Maine Fiddle Camp. After intermission we might even have a barn dance in Fellowship Hall.

Doug likes to play the “old-time piano” for dances, melodramas, honky tonk saloons, and silent movies. He learned his style from Otto Soper, Geneva Walton, and Danny Patt among many others. He plays with Old Grey Goose and produced all three of their recordings, including the group’s first recording in 1978 for Folkways, “Old Time Country Dance Tunes and Songs from Maine”, now available again on CD. Doug also plays piano, accordion, and fiddle. He is the Camp Director again this year.

Vogue magazine calls musician Owen Marshall “A guitar/mandolin/banjo player rivaled in character only by the occasional three-pronged carrot” (Vogue 2009). Owen has accompanied and collaborated with many of traditional music’s top performers including Aoife Clancy, Liz Carroll, Darol Anger, John Doyle, Andrea Beaton, Jerry Holland, Ari & Mia Friedman and his own traditional Irish trio “The Press Gang”. His music has appeared on NPR “the Thistle and Shamrock,” BBC television, and the back of his left elbow has appeared on MTV. In addition to being a respected performer, Owen is in demand at music camps throughout New England and the U.S., where he shares his approach to accompanying traditional music.

Neil Pearlman is emerging as one of the traditional music scene’s most innovative young artists. Legendary Cape Breton fiddler Jerry Holland said that “watching Neil’s hands on the piano is like watching two spiders on crack!” His piano style is rooted in Cape Breton traditions while drawing on latin, jazz and funk influences. The result is a exciting new sound that remains true to its traditional roots. An accomplished Cape Breton step dancer and mandolinist as well, Neil grew up in the family band Highland Soles and has performed with many of the best musicians on the traditional music scene today, including Natalie MacMaster, Alasdair Fraser, Seamus Connolly, Kimberley Fraser, Abby Newton, Frank Ferrel, Maeve Gilchrist, Mike Vass, Ed Pearlman and Greg Boardman.
Visit Neil’s website at www.neilpearlman.com.

To purchase tickets to a Meeting House Presents concert, click on “buy tickets” to the event you want to attend. You will be taken to the Brown Paper Tickets website where you can complete your purchase.

Ticket purchases are non-refundable. A small service charge in addition to the ticket price applies to every purchase. A portion of the service charge is used to support arts and cultural organizations throughout the United States. Tickets can also be purchased at the door with cash or check.